Animal World War War- what is it good for, dice rolls and tactical mirth.

The humans are long dead, and animal kin has risen to rule the earth. Two empires are remaining: the Empire of Herbivoria and the Empire of Carnivoron. Now you are on the frontlines to command their squad of animal Soldiers in an ultimate fight for survival. All players are split into two teams, making for exuberant cooperative play.

An keen feature of this game that in addition to the core rulebook, which provides everything in great detail that you need to know to play the game, is that they included several smaller booklets directed specifically at different tactical aspects of the game and the different types of soldiers available. They came in handy as quick reference guides as we played.

In Animal World War, the first thing you need to do is split up; divide 2-24 player into the two factions or Empires that are currently existing in the game world. The two empires are the Herbivorians and the Carnivorons. It is recommended to have even numbers of players on each team; however, that is optional.

Next decide as a group how many soldiers will be played for each empire. Some preset missions and legacy play set this number for the game. Select a squad of soldiers and share them between the players for each empire and then battle to accomplish the directives. The legacy campaign delves into the story of the history and the characters. It looks to be quite a fun adventure lasting throughout several sessions. Another alternative is to set up a homebrew game with different objectives and different shaped battle maps. Objective cards provide direction on board set up. Some missions are set for a short mini game that lasts 30 minutes to an hour, depending on the map's size.

For our purposes, we played a starter mission with four players and two soldiers to learn gameplay and the rules. Each subsequent mission, we increased the soldier count by two for each play, and very quickly, we had some full pitched Animal Wars going on.

The playing "board" for AWW is made up of individual hexagonal (3.5 inch) pieces with different terrain types printed on each side that fit together in infinite combinations. When chosen randomly, you can get anything from an open field, light forest, dense forest, or a building in a village, each which provides a different level of cover (which will get to later). The B-side of each terrain is dirt, and blast pocked no man's land with a cover level of two. This occurs in different sections of the game board as the game progresses slowly, and the battlefield deteriorates into a massive field of no man's land, shellfire, guns, and war destroyed fields and cover.

First, set up the battle map. Using a preset mission, the card described the size of the map and unique features, and then we randomly populated the board with different types of cover. Next is choosing soldiers for each empire. Choosing your armies can happen in one of two ways. The first thing is deciding how many soldiers your empire is going to have in the battle. Once you have done this, you can decide to randomly select from your soldier deck the appropriate number of soldiers for your battle and proceed from there. Your second choice is to attempt to build a practical selection of soldiers that complement each other for a particular mission. We found both ways to be fun and exciting, each with their advantages and different and disadvantages.

We added a few curve-balls into our adventure battles by having the other empires select the tactics card from the tactics deck. This adds an individual a special rule for each team, and both teams will get a different rule, which gives them different advantages or disadvantages for the coming battle.

Before beginning the game, the last thing to do is to place your soldiers, which can be done in several different ways depending on the game selected. We alternated placement one at a time between empires.

All soldiers have specific individual abilities and in addition to their information on their individual cards. All get a single grenade to use during the game. There are ways to get more than one grenade, and these depend on different tactic cards, missions, and setups for individual battles or missions.

Each soldier type has different abilities that are attributes that give them different advantages in different situations; for example, a captain as an action can choose to give his action to a different character so they can take two actions in a turn. The sniper who usually only would get one shot could get the extra action from the captain, and then the character player could choose for the sniper to have two shots in one turn, which is uncommon but useful. 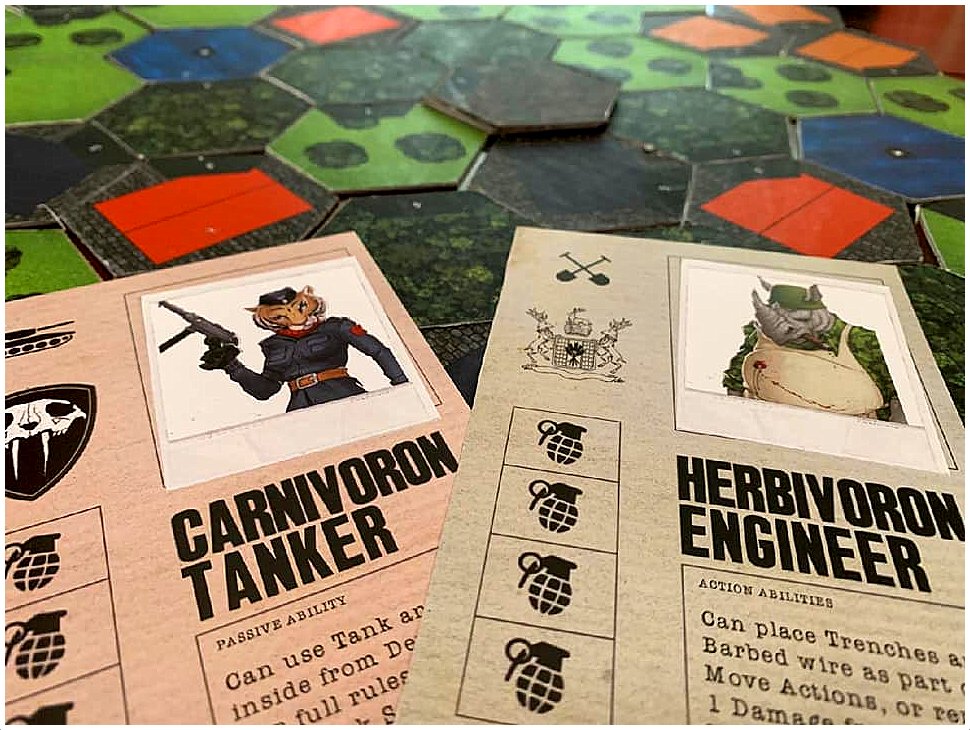 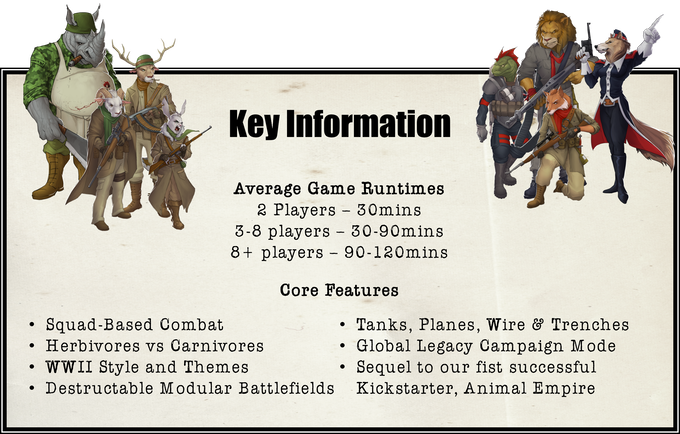 Overview of the Soldiers

The Chef provides a passive increase of one health to all soldiers of their empire at the start of the battle.

The Engineers can repair trenches tanks in buildings and dig new trenches in the masses of Barbwire.

The Flamer may use their action to automatically deal damage to any soldiers’ civilians and tanks in one adjacent tile as well as the tile; it is to the tile itself, encouraging its way to become no man's land.

The Gunner instead of having a single shot, it has three individual shots that you roll for separately at one target in his turn.

Medic has the ability as an action he can patch up soldiers and perform life-saving surgery, which means that he can heal either a soldier's full health or two points of his health depending on the situation.

The Observer who can call in artillery strikes on tiles across the game board which becomes very handy and deals quite a bit of damage the same amount as a hand grenade however he does not have to roll for success on each tile between themselves in their target they only need to roll for success on the target Square.

There are pilot soldiers which provide an empire with a single aircraft for a battle; they can fly strafing runs across the game board for damage on a multitude of hexes and their contents or drop a single bomb on a single space and damage everything in the space.

Recruits which have the ability to respawn at their next turn after being destroyed.

Game play consists of two phases for each empire. Each empire will have one move and one action available for each soldier in turn. Unless specified by the benefits of a specific card such as a captain which we've already mentioned, you're not obligated to move or take action, but you are still limited each turn to one of each the movement face you can move from one tile to an adjacent tile that does not have a cannot cross symbol on it.

Individual hexes on the game board either begin as inaccessible at the beginning of the game or become inaccessible during the gameplay.

Each hex has a particular cover value which is vital for combat some characters can put barbed wire barriers on hexes or to dig trenches, which in the case of Barbwire renders space inaccessible in the case of a trench increases the cover for that hex from its existing 2,3,4,5 to a level 6 level of cover. 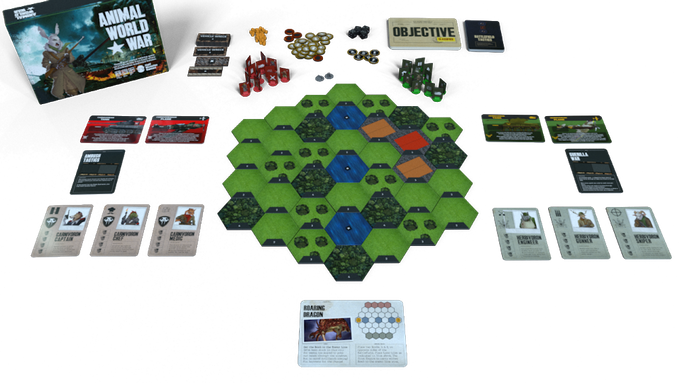 A smart feature of this game is that when someone takes the shoot action, they can shoot across the entire gameplay area. However, they must roll for each hex that their bullet, or a rocket, etc., moves through on its way to the target hex. If the first hex between you and your target has an open field and has a cover level of two, therefore, you must roll a two or better to continue the action successfully. The next hex, which has your enemy on it, also has a cover level, and you must also successfully beat that cover level. Depending on your weapon, your bonuses, or other benefits, the damage will vary that you give to the opponent's character.

Another example of an action is throwing grenades; however, they can only be thrown from an adjacent space. You must successfully beat the cover level for the grenade to explode. The hex, regardless of the roll of the dice, will take damage and once the damage is equal to its cover, become a no man's land with a new cover level of two.

This is a war game; the soldiers take damage, can get wounded, and can even die. Soldiers can take damage when they are hit by rifle fire, sniper fire, hand grenades, rockets from rocket launchers, or bombs. They can be healed by Medics if they are in the same space together. When soldiers are reduced to zero health, they are considered wounded and cannot take action or move until they are healed or die. A wounded soldier dies and is removed from the game if damaged while wounded. The exception to this is the Recruit soldier. When Recruits die, their player can respawn them at their base in their next turn.

The game is reminiscent of the game Stratego with charismatic animal/man hybrids charging the field with retro weapons! It is teeming with tactical engagements. Though, teams of two, dividing the soldiers amongst the team gave each player an integral interaction on the battlefield.

Critical for a successful mission in this game is teamwork.

The artwork is captivating and well suited for the game.

The rules are pristinely clear and that made for swift learning of the game and oodles of time to plan tactical strategies.

The combat is surprising and extremely stressful at the end while nearing the objective.

The game play was original and satisfying.

Animal World War is engaging, dicey and riveting to play!

Let’s be honest; there is still a bit of drama when we play.

Sit Down -Grab a Drink – Join the Game

A post-apocalyptic war game that can be played in teams or competitively.

Amplifying Gardens in The One Hundred Torii

When Teachers Grow into Family